Showing posts from February, 2021
Show all

Thy Kingdom Come by Monica James 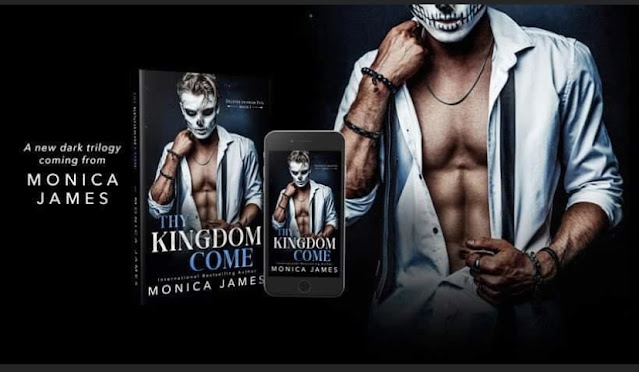 THY KINGDOM COME         Book I: DELIVER US FROM EVIL TRILOGY Monica James   Monsters are real. When I was five years old, I watched my mother take her last breath—a breath three monsters stole from her. I never chose this life. My father says it’s my birthright, but all I see is a curse. It’s because of the Kelly name my mum was slain by the Doyles—our enemies in Dublin, the fellas livin’ on borrowed time.  All of Belfast fears my family, especially me. I’m Puck Kelly, otherwise known as Punky; the lad ye don’t want to double cross.   I don’t do feelings or emotions. I never have…until she walks into my world. Babydoll is a liar and a thief, but I can’t stay away. We both thrive in the darkness because that’s where our demons can play. No word af a lie, sixteen years later, those monsters still haunt my dreams. But every monster is scared of somethin’…and that somethin’ is me. No more hiding in the shadows because I’m huntin’ youse.  Run, wee monsters, run. Thy Kingdom Come  Series: B
Post a Comment
Read more

♦ ♦ ♦ Brexley has endured starvation and survived torture and even Warwick Farkas, the brutal legend who still haunts her like a ghost, spilling into her thoughts and life. His betrayal made her a prisoner of Killian, the gorgeous Fae Lord of Budapest. There her life takes another unforeseen twist, something that will change the fragile alliance between the humans and the fae, and Brexley finds herself in the middle. As weeks go by, Brexley also discovers Killian isn’t the malicious leader she was told about. As they spend more time together, their relationship begins to shift. However, when an old acquaintance turns up, she is given the chance to escape the sexy fae leader, and her entire world explodes. Brexley is thrown into a nefarious web of politics, desire, betrayal, lies, and truths that will shatter her foundation and who she is, what she believes, and who can be trusted. No longer is there a clear line between good and bad. Hunted by both sides, Brexley is on the run and mu
Post a Comment
Read more
More posts