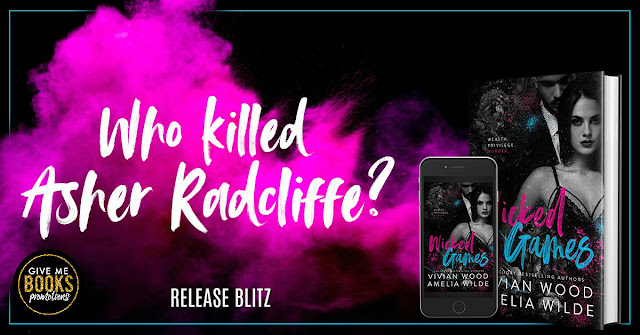 
A secret society.
A forbidden crush.
And an unsolved murder...

Obscenely wealthy, socially connected, and heart-stoppingly gorgeous, he’s everything she ever dreamed of in a man.

But at a place like Campbell College, there’s no escape. Not from Wolf, and not from the secrets hidden behind the graceful facades of the campus.

With every day that passes, she’s drawn deeper into the underbelly of the wealthy and privileged at Campbell: a secret society known as the Skulls & Thorns.

And with a murderer loose on campus, she’s running out of time to escape.

Wicked Games has it all....Suspense...Lust...Love...Deception! Emily does not let anything get in her way of what she wants and her dream is to go to Campbell College. That is until she meets Wolf, a wealthy and handsome frat boy. There's immediate sparks flying when they meet as they're both caught off guard. Wolf is still having a hard time with the death of his friend the previous year and continues to wonder who among his friends was responsible for his death. When Emily finds out about the death of his friend, she's determined to solve the mystery while putting herself in danger.  This story will keep you on the edge of your seat until the very end and then leave you speechless!

Pulling my two heavy textbooks for this class out of the stack too, I arrange everything nicely. Just as I am getting my brand new pencils ready, I am startled by a loud bang. My desk mate drops his books on the countertop and sits down, looking at me askance.
I startle to realize that it’s the blond Greek god I ran from only yesterday. Tall and broad-shouldered, he wears his black denim and dark blue tee shirt incredibly well. He knows it too, judging by his posture. He perches on his stool and crosses his arms, expectant. Perfectly unkempt sandy blond hair, dark brows spread wide over the darkest blue eyes I’ve ever seen, a patrician nose, two incredible cheekbones, and the most expressive lips…
This guy is fucking hot, excuse my French.
Which are currently smirking at me. I knew hot guys back home in Prineville. Mostly I avoided them, truth be told. But this guy is on another level. He is so dazzling that he could work in television… and bad tv just so happens to be my weakness.
Being around this guy is enough to make me rethink the bright yellow tee shirt dress I am wearing. I want more than anything to tug the hem down and smooth my hands over my black tights, but I don’t.
Instead I blush, fumbling to introduce myself. Sticking my hand straight out and tossing my messy blonde hair back, I try for an authoritative voice. “I’m Emily Danes.”
At the front of the classroom, the professor clears his throat, ready to start talking. My eyes dart to him, but then he reaches for his bunch of tissues again. Glancing back to my partner, I see him eye me up and down in a totally unsubtle way.
At last, he leans forward and shakes my hand. His skin against mine is hot. I bite my lip, refusing to let a little thing like instant animal attraction do me in.
“I’m Wolf,” he says, his voice low and gravelly. He looks me over once more. Then he arches a brow, his smirk deepening. “Did you find all of your panties last night?”
My cheeks instantly go the exact color of a ripe tomato. I lick my lips and frown. What am I supposed to say to that?

Vivian likes to write about troubled, deeply flawed alpha males and the fiery, kick-ass women who bring them to their knees.

Vivian's lasting motto in romance is a quote from a favorite song: "Soulmates never die."


Amelia Wilde knows what it’s like to be lovestruck, and she writes it into all of her books. Authoress of over sixteen spellbinding romances, she lives in the northern climes of Michigan. It’s very cold, but her sexy husband keeps her very warm.